Strength of the Economy Is Surprising the Experts

Strength of the Economy Is Surprising the Experts 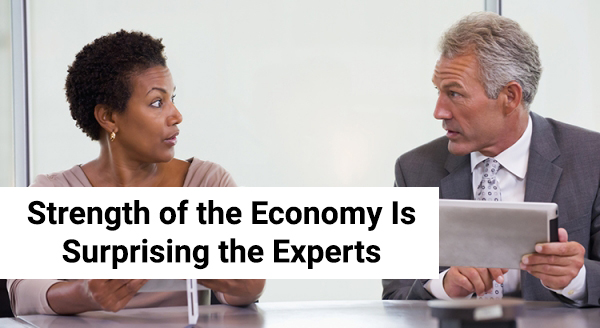 We’re currently in the longest economic recovery in U.S. history. That has caused some to ask experts to project when the next economic slowdown (recession) could occur. Two years ago, 67% of the economists surveyed by the Wall Street Journal (WSJ) for the Economic Forecasting Survey predicted we would have a recession no later than the end of this year (2020). The same study done just three months ago showed more than one third of the economists still saw an economic slowdown right around the corner.


The news caused concern among consumers. This is evidenced by a recent survey done by realtor.com that shows 53% of home purchasers (first-time and repeat buyers) currently in the market believe a recession will occur by the end of this year.


Wait! It seems the experts are changing their minds….

Now, in an article earlier this month, the Wall Street Journal (WSJ) revealed only 14.3% of those economists now believe we’re in danger of a recession occurring this year (see graph below): 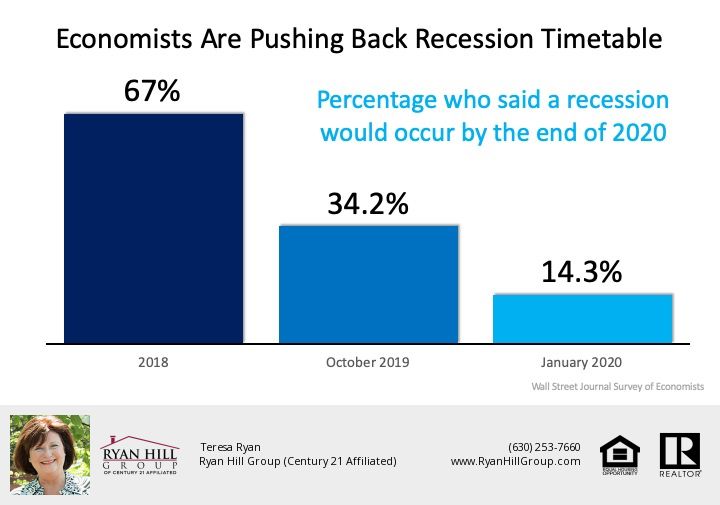 “The U.S. expansion, now in its 11th year, will continue through the 2020 presidential election with a healthy labor market backing it up, economists say.”

This optimism regarding the economy was repeated by others as well.

“Just months after almost everyone on Wall Street worried that a recession was just around the corner, Goldman Sachs said a downturn is unlikely over the next several years. In fact, the firm’s economists stopped just short of saying that the U.S. economy is recession-proof.”

“When Barron’s gathers some of Wall Street’s best minds—as we do every January for our annual Roundtable—we expect some consensus, some disagreement…But the 10 veteran investors and economists who convened in New York on Jan. 6 at the Barron’s offices agree that there’s almost no chance of a recession this year.”

“The U.S. economy is heading into 2020 at a pace of steady, sustained growth after a series of interest rate cuts and the apparent resolution of two trade-related threats mostly eliminated the risk of a recession.”

There probably won’t be a recession this year. That’s good news for you, whether you’re looking to buy or sell a home.